I am longtime volunteer at Sandy Pines Wildlife Centre in Napanee. My preferred activity there involves caring for injured native turtles.  These animals are brought to us because they have been severely injured by vehicles as they cross roadways that divide their wetland homes.

The snapping turtle in this story had been injured on the roadway early this spring, when she was searching for a good spot to lay her eggs. She recovered well and we decided to send her back home, still carrying her eggs, so that she could finish the important job that almost (but didn’t, thanks to Sandy Pines Wildlife Centre) cost her life.

What do you do with a 20-pound snapping turtle in your trunk who insists that the view is better from the back seat?  This was my predicament as I was en route to release a very pregnant turtle back into her home wetland. 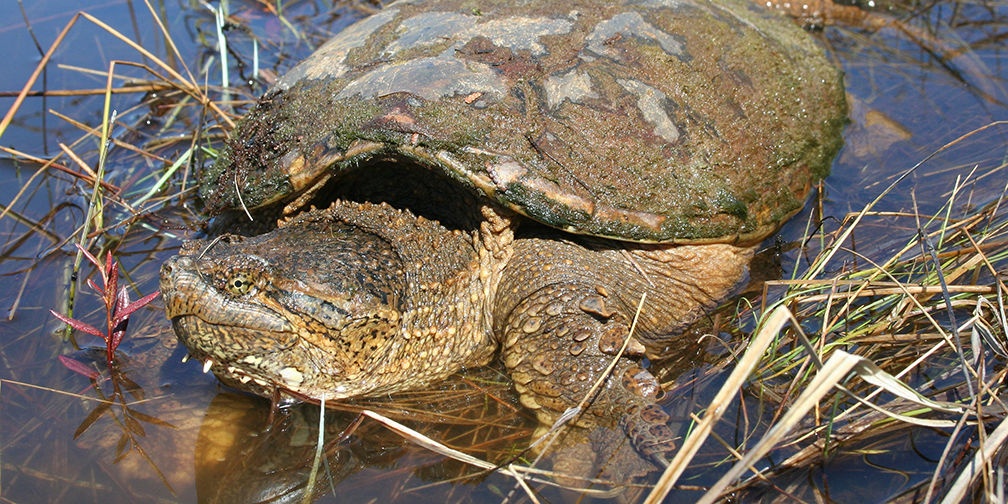 We started off well. She was safely (and calmly) stowed in a big bin in the trunk of my Subaru hatchback. The cargo cover was snugly closed, giving her a nice dark refuge for the journey.

Before long, however, she became quite agitated.  I worried that she might lay all 35 of her eggs before we made it to the wetland.  Imagine my reaction when, upon looking in my rearview mirror, I saw the cargo cover showing a large moving pointy bulge.  When I checked again, I found a large snapper head peering out from under the cargo cover and I saw the determined look in those shiny black eyes.

Time to intervene.  I pulled over and used the only thing at hand – my snow brush – to suggest to the turtle that I preferred that her beak remain below the cargo cover.  I also called for back up.  My partner agreed to drive our vehicle.  I moved to the back seat and, with the snow brush, reminded our girl that lying low was the best idea at this time.

As we progressed, things deteriorated.  The discomfort from the snow brush became a mere annoyance as she pushed her head increasingly further into the back seat. 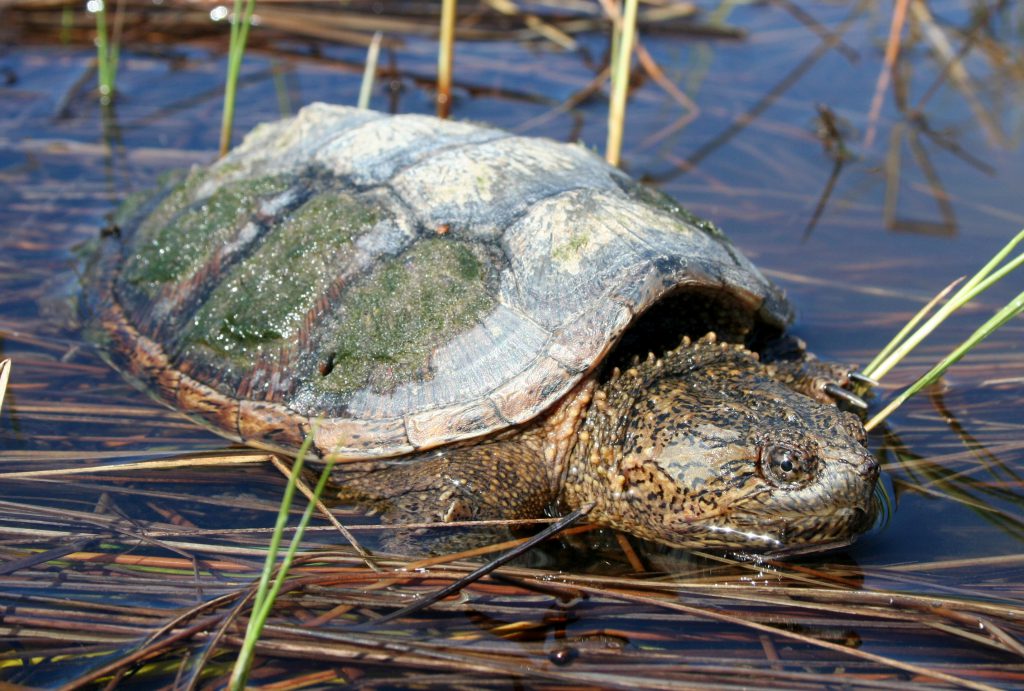 Panicking a little, we stopped at a stranger’s house.  I fashioned a makeshift lid for her bin. The owner found some rope.  We tied knots – many knots!  Houdini would have been challenged to escape from this bin. And then we drove off again.

Within an alarmingly short span of time, however, Ms. Houdini had pushed her way out and was using her powerful claws in an attempt to join me in the back seat. The rest of the trip was quite stressful for the three of us.

We finally found a good release spot on private property.  The owners were enjoying a “happy hour” at the water’s edge but welcomed us like V.I.P.’s.  While being carried in her bin to the shoreline, Ms. Houdini demonstrated both poise and composure.

It was a perfect shoreline.  The turtle pushed off strongly into the shadowy depths and disappeared.

Another satisfying day as a volunteer in wildlife conservation… 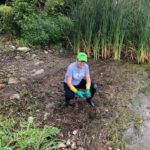 Susan Irving is a retired neuropsychologist. Since retirement, Susan has been a volunteer at Sandy Pines Wildlife Centre, a facility licensed to rehabilitate Ontario native wildlife. Susan and her partner are also members of Ontario Nature’s For Nature For Ever Circle.

The tale of a very determined turtle